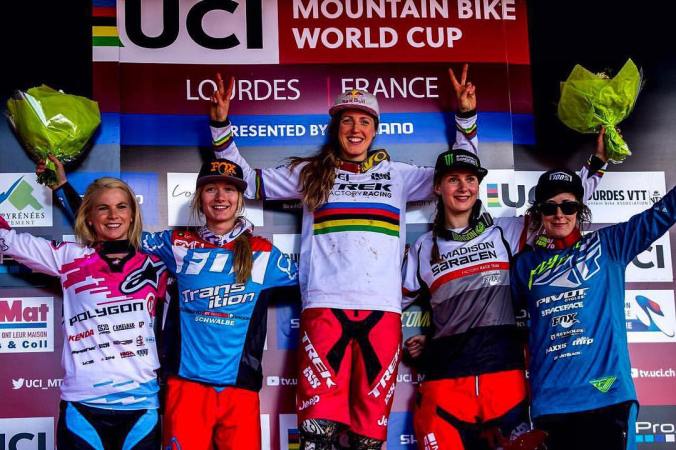 Lourdes was never going to be an easy race, but the continual rain for days before certainly didn’t help. The three British riders, Manon Carpenter, Rachel Atherton & Tahnee Seagrave looked like the top contenders right from the off and with Myriam Nicole out with her 3rd broken collar bone and Raggot retired the field was looking a little more bare than usual. All the French hopes were on 2012 World Champion Morgane Charre.

Australian National Champion Tracey Hannah was looking pretty fierce on track despite having a nasty crash in Lourdes last year. She is one to watch out for this season, after a few seasons of lacking in form and being riddled with injury it is clear she is thirsty to be back on that top step.

Switching the snowy French Alps this winter for the muddy Welsh countryside has clearly paid off for former junior World Champion Tahnee Seagrave after she smashed qualifying by almost 5 second, even with a crash.  But on the day no one could hold off Rachel Atherton as her good form from 2015  looks set to continue into the 2016 season. But Seagrave was hot on her tail with a gap of less than 5 seconds between the two.

Surely this is the year Seagrave will get that first World Cup Win.

The next round is just under two weeks away in Cairn Australia and my prediction is that Hannah is going to pull something special out of the bag for her home round, she is clearly hungry for a win!